A genus of about 40 species, herbs, of e. North America and Eurasia (after the exclusion of Ageratina, Chromolaena, Conoclinium, Eutrochium, Fleischmannia, and other genera). I have differed considerably from Cronquist's treatments, as for instance in SE, regarding the rank at which to recognize taxonomic entities in Eupatorium. In the Southeastern United States, Eupatorium is a reticulately evolved complex, including diploids, triploids, and tetraploids; derivatives of hybridization produce sterile pollen but in some cases reproduce vigorously via agamospermous production of seeds. In some cases, these entities form separate populations from their presumed parental species, with distinctive ranges and habitats and more-or-less distinctive morphology. Cronquist treats morphologically highly distinctive entities, such as E. pinnatifidum, as full species, while stating that they are “not long-persistent”. He treats morphologically more subtle entities as varieties of one of the two presumed parental species, such as E. album var. vaseyi ("very probably derived by hybridization of E. album var. album and E. sessilifolium"). Other entities, difficult to distinguish morphologically from another species, he does not recognize, as for instance E. saltuense, included as a synonym under E. altissimum (“E. saltuense may reflect hybridization between E. altissimum and some other species such as E. album, or possibly between E. hyssopifolium and E. album”].

A species concept that stresses ecological, biological, and distributional independence seems preferable. When plants of a putative hybrid occur in substantial populations, reproducing independently of one or both alleged parents, and in geographically and/or ecologically distinctive situations they should be treated as a separate species. Only field observations and studies can provide the necessary information. I have seen no evidence that E. ×pinnatifidum (though morphologically strikingly distinctive) occurs independent of its parents; thus I treat it as a hybrid (see below). E. vaseyi regularly occurs without one or both of its presumed parents, forms fertile achenes, occurs in large populations, and (in NC) is distributionally more limited than its presumed parents (Sullivan 1978). Biologically, it is best treated as an allopolyploid species; its treatment as a variety leads to conceptual and nomenclatural problems (reflected in the synonymy above 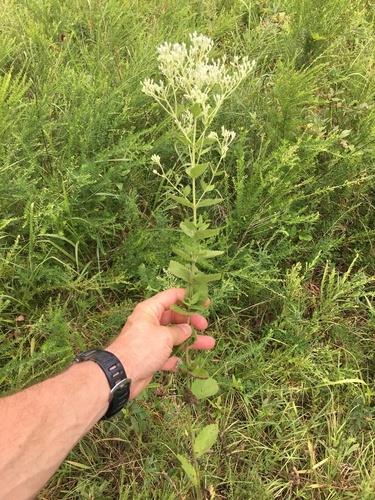