A genus of about 220 species, woody vines and herbs, subcosmopolitan in temperate and tropical regions. Our deciduous species are a monophyletic group within Smilax, with a classic eastern North American/eastern Asian disjunction, and have been treated as section Nemexia or subgenus Luiste (Wilbur 2004, Fu et al. 2005); Li et al. (2011) found a complex phylogeny not easily reflected in a sectional taxonomy. Smilax berries and shoots provide important food sources for many wildlife species, including black bears (Ursus americanus). The clades shown in the key follow Qi et al. (2013).

ID notes: The carrionflowers or deciduous smilaxes (lead 1a) are sometimes mistaken for Dioscorea because of a superficial similarity. They can be readily distinguished even in vegetative condition by Smilax section Nemexia having 3 (-5) main veins, the 3 central rejoining at the leaf apex (vs. Dioscorea with 7-13 main veins), and secondary veins in a complex reticulate pattern (vs. Dioscorea with secondary veins forming simpler and largely perpendicular cross-connections between the primary veins). In the woody smilaxes (key lead 1b), the underground parts (while not easy or convenient to observe or collect) provide useful characters, used in the key and helpful (but not generally necessary for identification). "Tubers" are rounded, lumpy, and starch-filled thickenings (often borne in compound, rounded or elongate masses). "Rhizomes" are unthickened, straight underground stems, usually with swollen (but not tuberous) nodes. "Runners" are thinner, elongated rhizomes. "Rootstocks" are short, knotty underground stems, neither running nor tuberous. Coker (1944) remains a basic resource. Wilder (2020) provided a very valuable analysis of the morphology of S. auriculata, which is broadly applicable to the woody species of the genus. 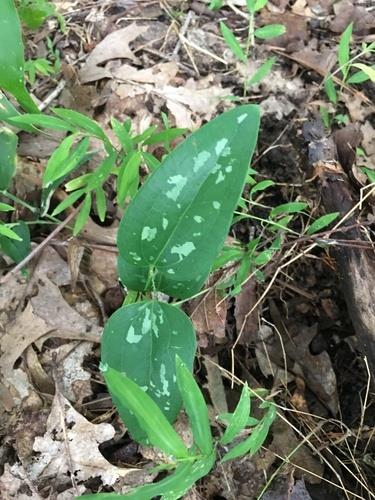