A genus of about 525 species, herbs (rarely subshrubs, shrubs, or treelets), of temperate regions of the Old and New Worlds.

Viola has presented numerous problems in taxonomy, distribution, and identification. Particularly troublesome are the so-called “acaulescent blue violets”, including V. sororia, V. sagittata, V. palmata, V. septemloba, etc. They may be difficult to identify due to morphological overlap, or trying to key plants without mature leaves; in some instances hybridization may be suspect, or inadequate morphological characterization of the diversity found in nature and the herbarium continues (new taxa are being found on an annual basis). Leaf maturity is an important feature to recognize – the earliest 1-2 leaves produced in most of these taxa are generally ovate-cordate in outline and may not display characteristic lobing, toothing, or pubescence until more mature leaves are produced, 1-2 weeks later. Specimens thus collected early in the flowering period can present the botanist with a perplexing series of plants that do not key cleanly. A second troublesome group contains the small white violets, including V. blanda, V. incognita, and V. minuscula. These taxa have been dealt with in various ways, but resist a wholly satisfactory treatment, due to apparent hybridization (Russell 1954, 1955). However, recent reviews of these 3 species in the Southeast show that V. blanda and V. minuscula are quite distinct, with V. incognita less so (but this may be due to paucity of specimens from the area). A third difficult group contains V. appalachiensis, V. conspersa/labrodorica, and V. walteri. They have been treated recently by Ballard (1992, 1994) and McKinney & Russell (2002). Despite the problems present in the genus, the great majority of plants encountered in the field may be successfully keyed out, particularly by botanists working within an area of several counties. Violet species are usually quite faithful to one or a few plant community types, so once learned these habitats can be valuable indicators as to which species to expect. Botanists working in larger regions (state, floristic province), however, must be aware of increased morphological variation and potential hybridization. All species possess brownish or reddish nectar guide striae in the corolla throat; these are ignored in the key. Hairs of the corolla throat and on leaf surfaces are important key characters; several plants should be inspected with a 10× lens before deciding the character state. De novo hybrids can be frequent in Viola, but they do not reproduce by the chasmogamous flowers, as reported in several publications by Ezra Brainerd. Their general intermediacy and their proximity to both parents makes hybrids relatively easy to diagnose and to infer their parentage, once one becomes familiar with species in the local area. Hybrids between species of caulescent blue and white rostrate violets, and between species of acaulescent white species, are always sterile F1s and do not produce viable seeds from cleistogamous flowers. However, most hybrids between species of acaulescent blue violets are unusual in being at least subfertile through cleistogamous seeds. Cleistogamous capsules of a few hybrids abort or contain only abortive ovules, while those of most hybrids develop normally but produce a lower proportion of viable seeds (containing some abortive ovules) than the parental species; and very few hybrids (e.g., V. fimbriatula × V. sagittata) show no reduction in viable seed output relative to the parents. Nearly all acaulescent blue violet species (including the new species and some “variants” presented here) differ in size, shape and color pattern of the mature seeds of naturally dehisced capsules—best collected by enclosing developing capsules in a small mesh beg and allowing the capsules to open of their own accord. Brainerd demonstrated that seeds (and their germinated progeny) of F1 and later-generation acaulescent blue violet hybrids recombine morphological traits of the parental species within each cleistogamous capsule. Thus, it is relatively easy to infer hybrid status from a cleistogamous capsule of a suspected hybrid by noting the presence of diverse seed morphologies within it, and even to interpret the parentage when one is acquainted with seeds of other local species.

ID notes: Leaf length should be measured down the midrib to an imaginary line connecting the very bottom of the basal lobes (in a leaf blade with a cordate or truncate base), or to the end of blade tissue (on a blade with a rounded or cuneate base). 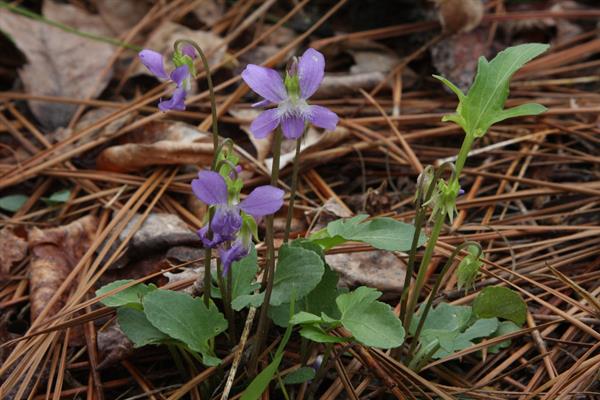 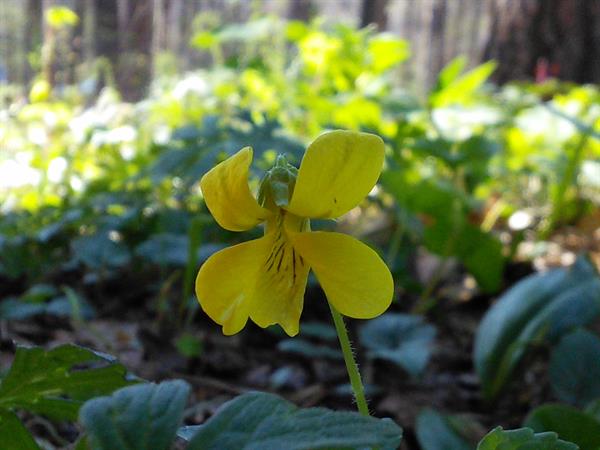