Torreya taxifolia Arnott. Florida Torreya. Hab: Moist ravines and bluffs, sometimes planted well outside its native range as an ornamental, and also rarely established near plantings. Dist: An endangered endemic of ravines along the Apalachicola River in Panhandle FL and sw. GA. Pittillo and Brown (1988) report that "young saplings [are] established downslope and beneath transplanted trees south of Highlands [Macon County, NC]." Godfrey (1988) reports that the national champion Florida Torreya is in Warren County, NC, with "a near-basal circumference of 9 feet, a spread of 52 feet, and a height of 60 feet. It is estimated that it may have been planted there about 1830". Additionally, the organization Torreya Guardians has planted Torrey widely in eastern North America, such as in western North Carolina, and these deliberate attempts to establish the species outside its current range by plantation may be encountered by field biologists. 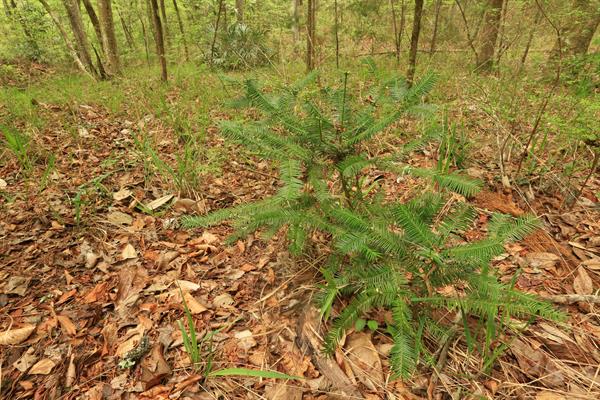