A genus of about 25 species, perennial herbs, nearly cosmopolitan. The unusual species S. lunarioides has been regarded as belonging to a monotypic section, Hiemobotrychium W.H. Wagner. Zhang et al. (2020) found S. lunarioides to be basal to the rest of the genus, and ambiguously advocated that it be treated as a monotypic genus, Holubiella Škoda. For now, I retain it at sectional rank as Sceptridium section Hiemobotrychium, but its recognition at generic rank may well be warranted.

ID notes: Sceptridium has thick, leathery leaves ternately divided, and an overall equilaterally triangular or pentagonal outline. The leaves emerge in the spring, summer, or fall of the year, and overwinter, withering the following spring. The leaves are often purplish or bronze, or green with shades of purple or bronze. Identification of some of the species is problematic or indefinite, based on subtleties of the shapes of the ultimate leaf divisions. The "Grape Fern" common name refers to the fertile leaves and the large sporangia, yellow when mature. 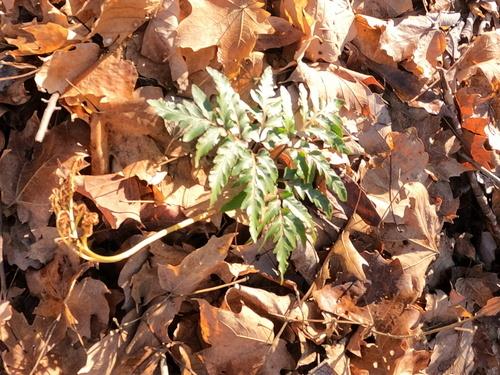