Daucus pusillus Michaux. American Queen-Anne's-lace, American Carrot, Rattlesnakeweed, Seed-ticks. Phen: Apr-May; May-Jun. Hab: Rocky prairies, open woodlands, pastures, fields, roadsides, waste places. Dist: Widespread in Southeastern United States, north to NC and MO; also distributed on the west coast of North America and south into n. Mexico. It should be expected in the lower Piedmont of NC and in the Coastal Plain of se. VA, which it closely approaches. Robert Wright has collected this species as a waif in Henrico County, VA (R. Wright, 2002, pers. comm.). The native distribution of this species is speculative.

ID notes: This native carrot is smaller and less branched than the ubiquitously naturalized D. carota, and the involucre held bowl-like under the compound umbel and extending beyond it in flower and to about its edge in fruit is a distinctive gestalt. 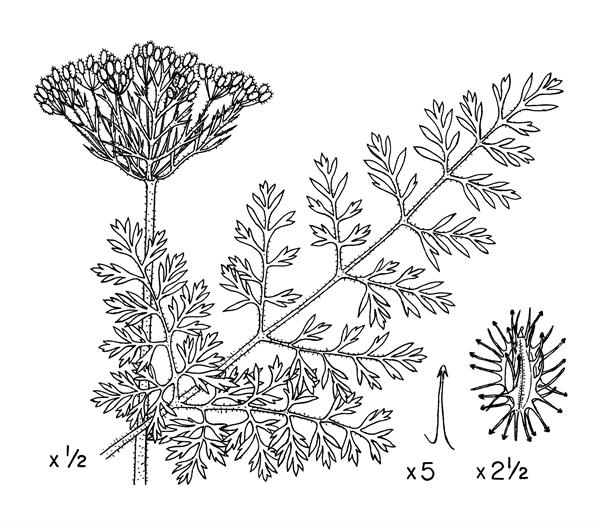 © Radford, Ahles and Bell [image randomly selected]
We don't have a lot of photos of Daucus pusillus yet. If you have a good photo you'd like to share, please send it to us. Thanks for your contribution!